So now fresh from my reconnection with my higher self, I set my intentions to see the face of my fears. The time was ripe. And the universe presented the fruits of my labors.

In late August 2008, I got an urgent call. My mother-in-law was being taken by ambulance from Santa Maria to Santa Barbara. And she wanted me. Before she allowed the doctors to do anything, she wanted me there. I am her medical agent, the one responsible for following her end of life wishes, yet she was fully cognizant, just scared.

So I drove the 45 miles to the hospital knowing this was it. I would be facing one of my fears. As a nurse practitioner, I had been called upon by the family many times over the years for medical advice. It was assumed by my elders that I would be the one to take care of them. And frankly, after decades of providing care for others I did not want to end my life as a caretaker. Plus being a caretaker is hard physically, mentally and emotionally. I have counseled many suffering from depression, insomnia, anxiety, and utter exhaustion from long spans of care-taking.

I knew that it was time to take in Steve’s grandmother while his mother recuperated. And then we would take her. And I knew my husband would agree to whatever I decided and would do everything he could to help. And I also knew it would be me doing all the work.

So I stepped into the ER and stepped into my fear. The family gratefully released all to me. My mother-in-law only signed the emergency surgery release after I counseled with her. It was clear that Steve’s grandmother was not happy being handed over to his aunt and uncle. So once his mother was taken to the operating room, we offered to take Gran. There was little resistance.

Gran came home with us. She was delight, but not safe with her rickety cane on our hard wood floors. So we got her a four wheel drive walker and at 89 years old Gran became mobile again. My mother-in-law had been living with her for the past six years and slowly Gran lost her ability to be productive…or so we thought. To me she was more than willing, so I put her to work. Gran was delighted to help and we found her much more capable than her daughters had reported.

She helped fold clothes while watching Ellen every afternoon and in the evening helped me with dinner. When Steve finally brought his mother home from the hospital, she was surprised to see Gran cutting veggies. “She can’t use a knife! She’s on Coumadin!”

I smiled. “She’s been very careful and if she cuts herself, luckily I can stitch her up.”

Shortly after she arrived, Gran said, “Since my stroke, I can’t smell very well. So you’ll have to tell me if I need a bath.” A day or two later, I sniffed her and announced it was time. She balked a bit nervous to have me help her in and out of the bath. But I had the perfect set up. Our guest bath had a tiny soaking tub with a seat inside an enclosed shower. So I warmed up the bath, and helped her in. Then she sat down, “Uh, oh!”

“You aren’t going to be able to get me up.” The seat was too low and her arthritic knees were higher than her hips.

She shook her head, “You’re too little.”

Ten minutes later, all parts of Gran were sparkling clean and I was soaked. After a failed attempt to lift her from the edge of the tub. I stripped off my sodden nightgown and climbed in with her. She laughed telling me that’s how her other daughter did it. I placed one knee between hers, squatted down, “one, two, three” and lifted Gran to her feet. She held me tight as I helped her over the edge of the tub and she didn’t let me go.

“It’s so nice to hold you like this,” she whispered. It was nice. “But there’s only three breasts between us!” She had had a mastectomy thirteen years before. I almost dropped her laughing!

That was Gran always finding delight in everything. I know it’s not easy accepting help especially if your role in life is to be of service. I hope I am a gracious patient and not a burden on my loved ones. But the stress of illness and the demeaning role of incapacitation can make the best of us turn sour. Yet Gran was a delight.

My mother-in-law was another story. I have yet to meet a medical professional who is a good let alone gracious patient and my mother-in-law is a retired nurse. She also had become one of those resentful caretakers that I didn’t want to emulate. So although my care-taking load more than doubled when Steve brought her home from the hospital, I was determined not to lose myself and took time every day for me.

Shortly after they arrived I got a call from Steve’s cousin. She had just been diagnosed with breast cancer. When it rains it does pour. So I spent time counseling her, helping her to see the spiritual message of the dis-ease. I find that breast cancer patients are very good at taking care of others, but quite poor at self-care. Their body speaks to them through the dis-ease. “Time to nurse me please.” I think she got it. And so did I.

I was so busy during this time, that I did not record it. There is nearly a month missing in my journals yet it is burnt into my memory. And it happened again the very next year. And the second time, I took care of them both for months instead of weeks. Yet in spite of the incredible stress, I am left with such pleasant memories.

Every afternoon, after Ellen, Gran asked if I was free to have coffee with her. I was still seeing patients three days a week in my office which is on our property. My mother ran my practice and was in charge of keeping an eye on Gran while I was in with a patient. Gran would push her walker out onto the patio overlooking the herb garden and chat with the patients as they admired the flowers. And when the last one left, I would sit and have a cup of coffee with her.

And I learned how to sit and enjoy being. Gran loved the garden, the flowers, the hummingbirds that would visit us, the butterflies, even the jays that shooed the songbirds from the feeders and especially the antics of the squirrels as they scolded the cat and the crows. Gran took delight in being alive. And I took delight in being with her.

My fear of care-taking transformed into joyous service. I had written about joyous service in LoveDance® but for the first time, I got to experience it. The family thought I was a saint. My husband cannot thank me enough. Yet it was I who am ever grateful for the opportunity to serve in love and joy. 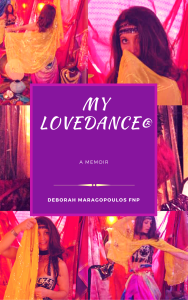